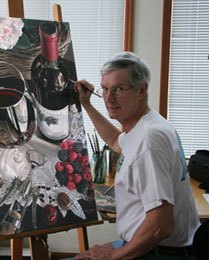 The Inauguration of the 47th Governor Tom Wolf will include a special exhibit at the State Museum of Pennsylvania in Harrisburg featuring both iconic artists from Pennsylvania’s history and the works of a diverse array of talented living artists from across the state.

In addition to world-renowned artists from Pennsylvania such as Andy Warhol, Andrew Wyeth, and Thomas Eakins, the exhibit will include “The Dressing Gown,” an oil painting by Brad Clever of Chambersburg, PA.

Submissions for possible inclusion in the exhibit were requested by special invitation from nearly 50 Pennsylvania museums and organizations, including the Arts Alliance of Greater Waynesboro (AAGW), whose successful Destination ARTS! project has resulted in five art galleries and free live music every weekend  in downtown Waynesboro over the past two years.  Brad Clever’s paintings have been featured in Gallery 50, 50 W. Main St., Waynesboro, PA since the inception of Destination ARTS! in July 2013.

“Fewer than 50 arts organizations were invited to participate and those included the Philadelphia Museum of Art, the Carnegie Museum, and the Brandywine Museum, so it was a real honor for us to even be asked to submit art for this exhibit” notes Andrew Sussman, Board President and Founder of AAGW and Destination ARTS! “Only 55 artists are featured from around the state, including the iconic ones, so to have one of our submissions accepted is very exciting and a fantastic acknowledgement of Brad Clever’s talent!”

Upon hearing the news, Clever stated,  “I am so honored to have been asked to participate in this exhibition, and to have my work displayed with my fellow contemporary artists, but most of all to have it hang beside the Pennsylvania masters of the past 250 years. I hope I am worthy.”

Brad Clever has been painting still life themes for over 25 years and gained national recognition in galleries spanning the country. from the Washington County Museum of Fine Arts in Hagerstown, MD., to galleries and exhibitions in New York City, Washington, D.C., South Carolina, Florida, California, Illinois and Ohio, Clever’s work has touched diverse populations since the early 1980s.

He has won several awards for his work, including the 2013 Best of Show at the Cumberland Valley Artists Exhibition at Washington County Museum of Fine Arts. In addition, Clever’s work has been featured in American Artist magazine and The Artists Magazine.

Marjorie Tressler, curator of Destination ARTS! Gallery 50, says that “Brad Clever is one of the finest artists I have known. His still life paintings are beautiful, consistent in quality, with strong compositions, precision in detail and use of color. I never tire of viewing his paintings and always find one detail I did not see before.”

The exhibition is fantastic in its scope and diversity and presents works by artists past and present, from all walks of life, and from communities all across the state.  The exhibit will continue to be on display during regular museum hours through February 15, 2015.

PARTICIPATING ARTISTS IN THE INAUGURAL EXHIBITION